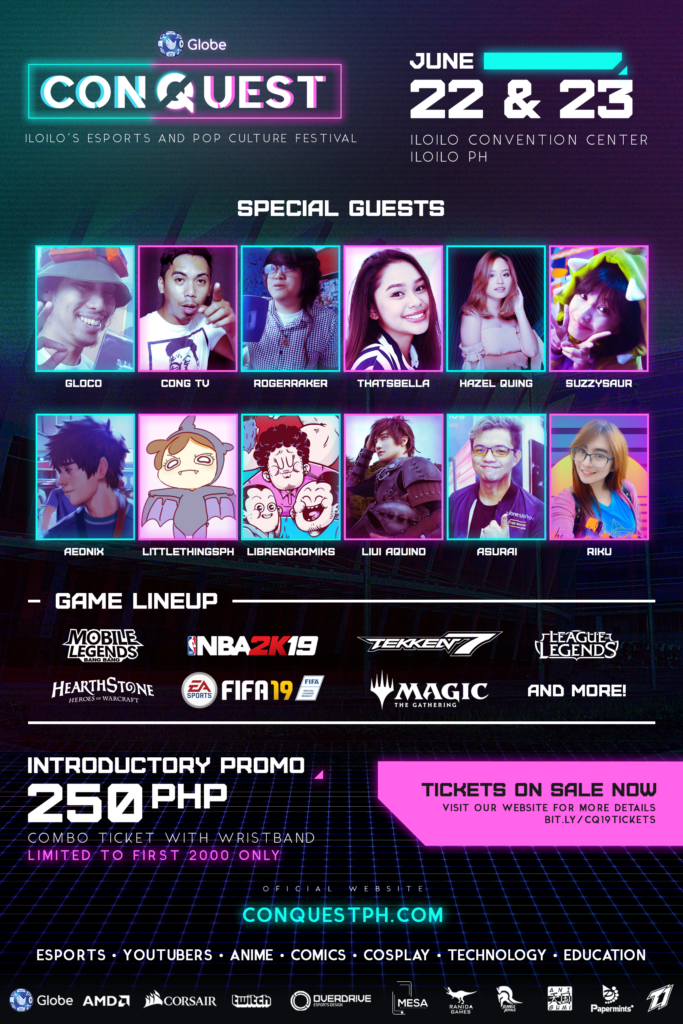 Now in its third consecutive year, Globe CONQuest Festival is positioned to be the largest student-run enthusiast event in the country. Every year, CONQuest brings together different pop culture communities — such as gaming, anime, comics, technology, vlogging — for a weekend full of fun and learning. Compared to other conventions, CONQuest emphasizes education and community development as its core tenets.

Enabled by the partnership with Globe Telecom, CONQuest is leveling up for 2019 with new attractions and guests for attendees of all fandoms. This includes:

● The national finals of the Globe Esports AcadArena collegiate league for League of Legends and Hearthstone
● QuestTalks — a series of industry panels and workshops by resource speakers from across the world
● Creative Corner — a bazaar featuring over 50 artists and merchants from different parts of the country.
● Open Tournaments for hit titles such as NBA2K, Mobile Legends, and Tekken.
● And more, including Game Developer Booths, Technology Exhibitors, Influencer Fanmeets, and a Food Festival.

Several high-profile members of the enthusiasts media industry will be present to host educational panels, performances, and fanmeets. This includes top streamers and vloggers such as Riku, Gloco, CongTV, ThatsBella, RogerRaker and Asurai. World-class artists, cosplayers, and industry executives will also be in attendance to add further value to the event, such as Aeonix, Liui Aquino, LibrengKomiks, Overdrive Design’s Rd Rogacion, and Twitch’s Mark Candella.

“We wanted to make a festival here in Iloilo where everyone can come together, learn, and have a fantastic experience,” said A. F rederick Sansait, Outreach Director for ISC Events. “We are thrilled to partner with Globe Telecom and are super excited for all of our attendees to have an amazing time.”

Tickets and more information can be found here: http://bit.ly/cq19tickets

ISC Events is a student-run events management & content production firm based in Western Visayas, Philippines. Founded in 2014, it is the official partner of Twitch and Globe Telecom for campus esports and pop culture in the Philippines. Contact them at [email protected]

CONQuest Festival is the first enthusiast event in Southeast Asia focused on education and collegiate esports. Founded in 2017, it is the Visayas’ premier esports and pop culture convention. Now in its 3rd year, CONQuest teams up with Globe Telecom to reach greater heights than ever before.

MLKT: Enjoy a Little Milk and Sweetness in Your Tea

Fri May 24 , 2019
MLKT is the milk tea brand you can see all over Facebook and Instagram that always invites you to grab one. It is a mobile milk tea store so it is a challenge to catch them in one location but they are making an announcement everyday via their Facebook Page […]