Molo – Iloilo City Proper via Baluarte Loop jeepney route (“Baluarte”) is for those who are residing in parts of Molo areas and those who have government transactions particularly in Bureau of Internal Revenue (“BIR”) and Department of Social Welfare and Development (“DSWD”). 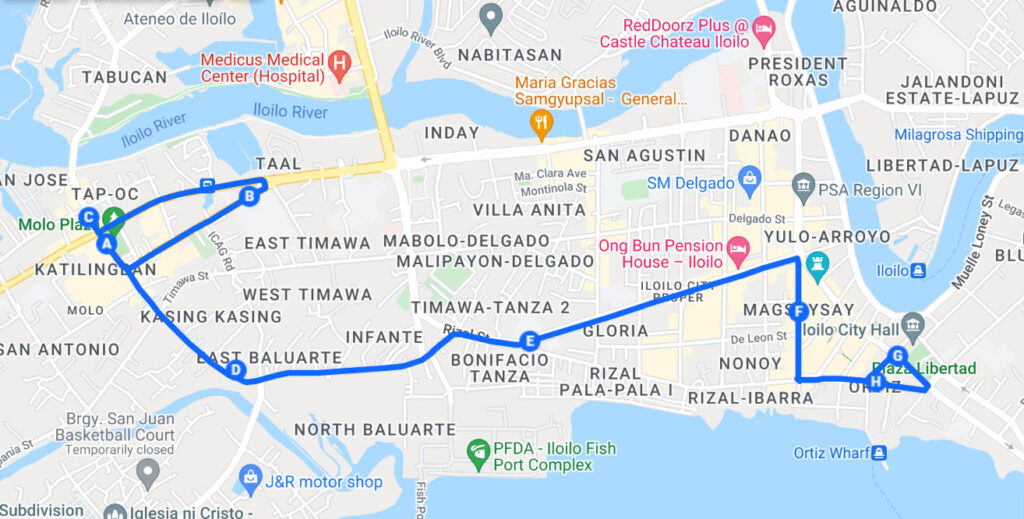 It is also the route that will lead you to establishments and landmarks like GT Mall Molo, BDO Molo, Plaza Molo, Molo Church, Molo Cemetery and Molo Supermart. 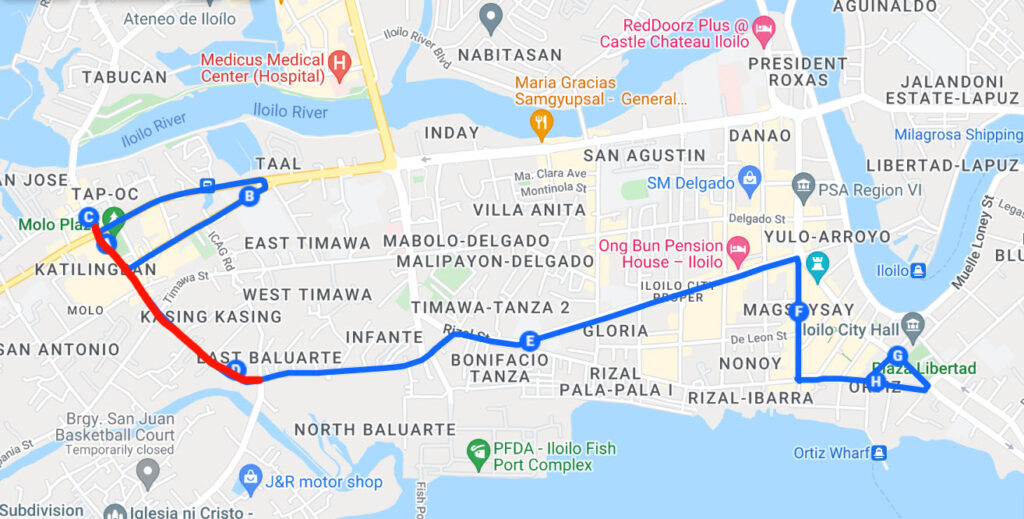 From Plaza Molo (the side where Molo Mansion is), it will pass by Locsin Street all the way to Lopez Jaena Street and Baluarte-Calumpang-Villa-Oton- Blvd.

This means, from Plaza Molo, it will pass by the portions of barangays Poblacion, San Antonio, Salvacion Habog-Habog, Kasing-Kasing, East Baluarte.

In this particular portion of the street, you will pass by Baluarte Elementary School, Makinaugalingon Press, and the residence of Don Rosendo Mejica.

This indicator ends where the Calumpang Route makes a turn going Calumpang-Calaparan areas. 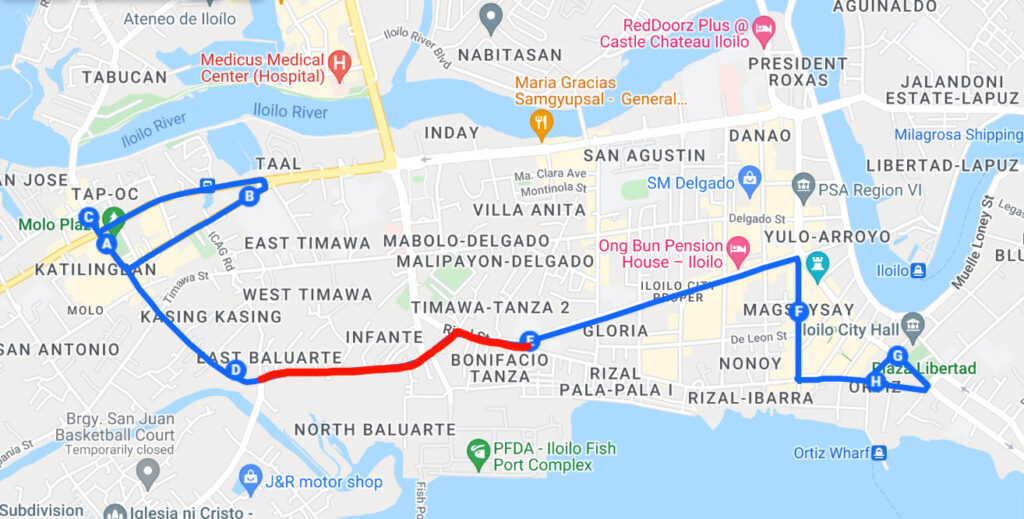 The next red line is from the Bangga Baluarte all the way to Tanza Church.

In this pass of the route you will pass by barangays of South Baluarte, North Baluarte, Infante, Tanza Baybay and Tanza Bonifacio. 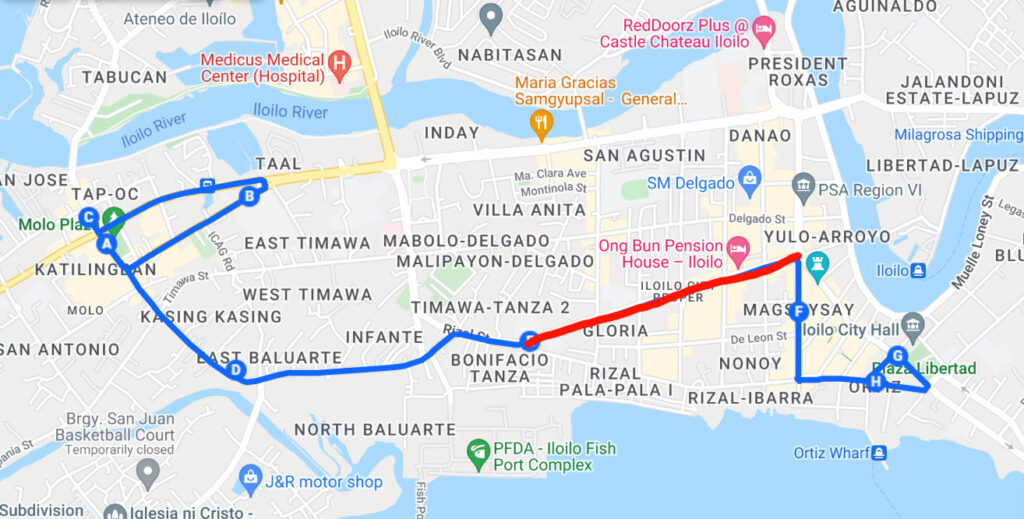 In this next indicator, this comprises the road from Tanza Church straight to Unitop-Socorro areas.

If the jeepney is from Plaza Molo/Molo areas going to the City Proper:

This route is passing Iloilo Terminal Market (“Super”) to bring passengers who have transactions in the said area. If there is someone whose destination is Super, it will take a turn in the corner of Ledesma-Jalandoni. This is where the “frontline” murals are located or across Seventh Day Adventist Church.

If there are passengers whose destination is super, it will make a detour at Jalandoni Street, De Leon Street and Fuentes Street before returning to Ledesma Street. (Don’t worry about the streets too much these are just the ones surrounding Super).

It will then go straight to Ledesma Street until it reaches Socorro Drug Store and will make a turn on the side of Iznart Street where the Chinese-Iloilo Friendship Arc is located. 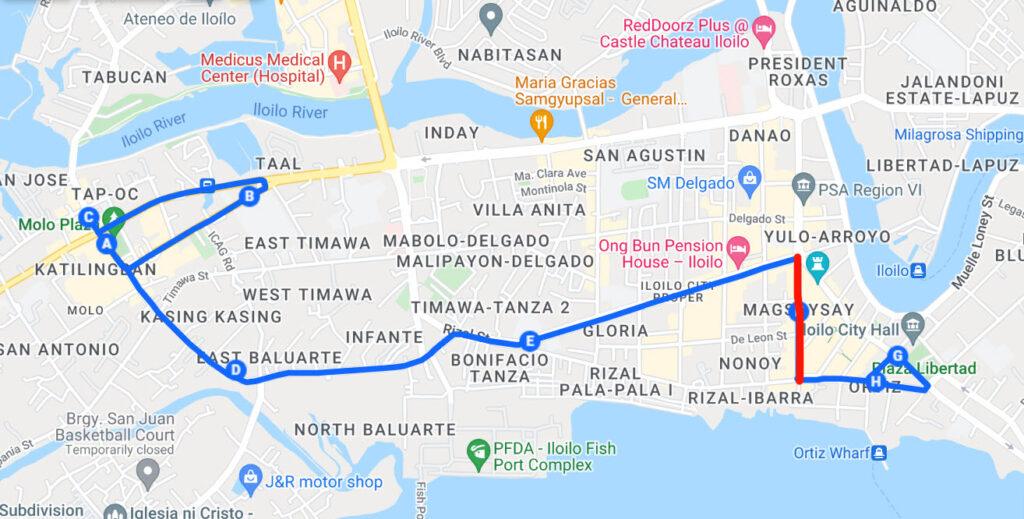 From Socorro Drugstore or the Chinese-Iloilo Friendship Arc is located, it will go straight until it reaches Maria Clara Statue. 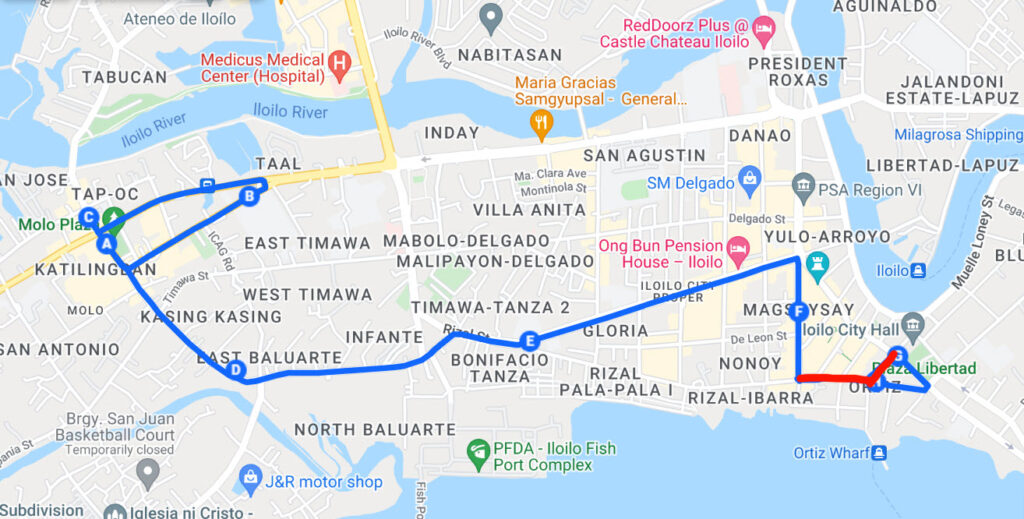 From Maria Clara Statue, it will make a turn in University of Iloilo area. It will also pass by Gaisano Guanco and make a turn at Ortiz Street until it reaches the Iloilo City Hall block. 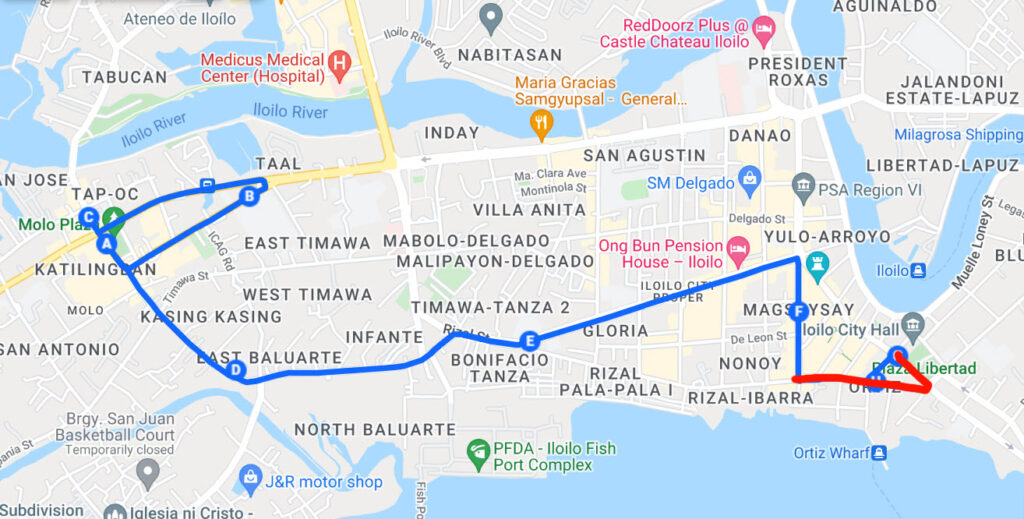 This part now is where you can find the Iloilo City Hall and Plaza Libertad. It will go straight to Mercury Drug Store, make a turn and pass by Iloilo Society Commercial, Gaisano Guanco and to return to Molo areas again. 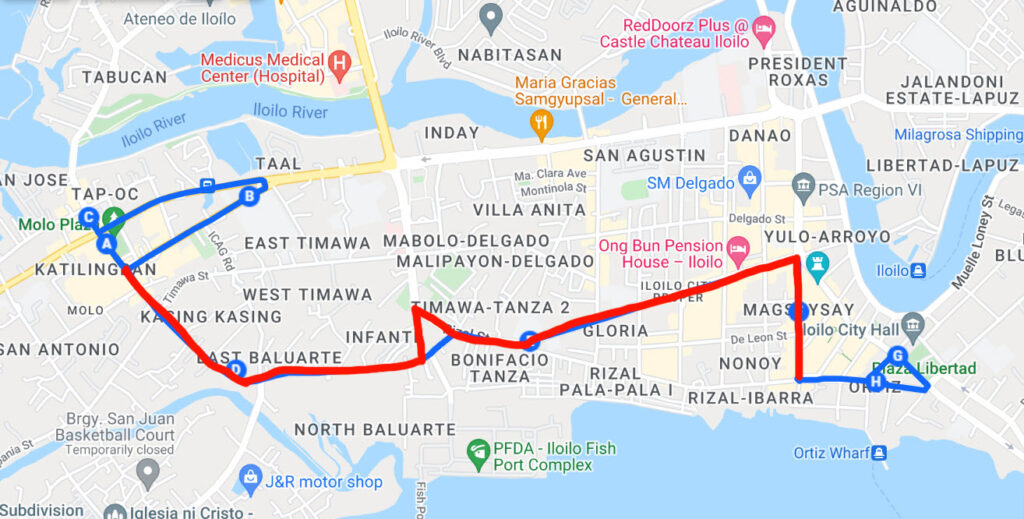 This one is the returning route. The jeepney will basically just pass through the same way again from Iznart Street, the stretch of Ledesma Street and Molo areas again.

If the jeepney is from City Proper to going back to Molo areas:

It will make a turn at the corner of Ledesma-Mabini (the side entrance of Robinsons Place Iloilo). Passing the streets of Mabini, a portion of J. De Leon and Fuentes until it can return to the main of Ledesma Street.

If you want to drop by Super, always tell the driver that your destination is there or else he will not pass this alternative route. 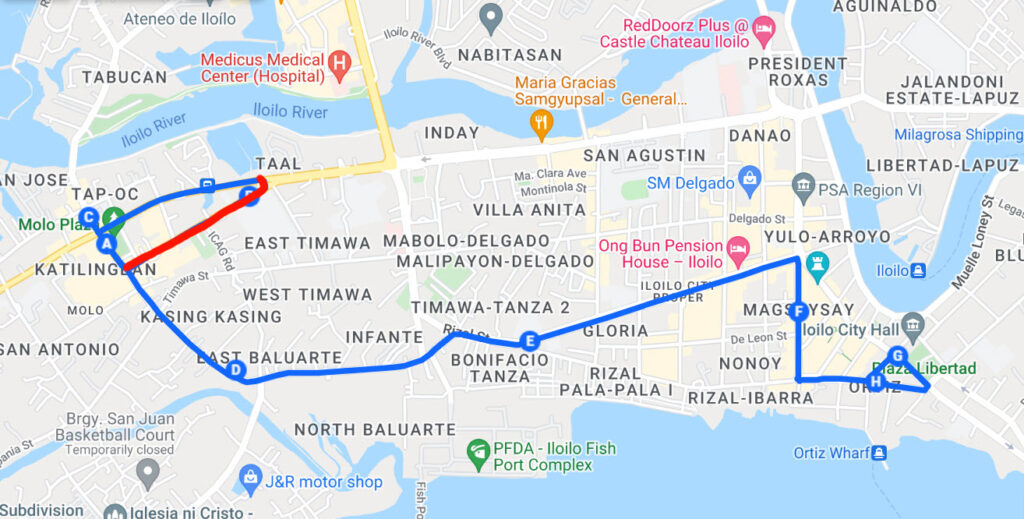 This one is from Molo Plaza again but will pass by M.H. del Pilar Street. This is just the street where GT Mall Molo, DSWD, BIR, Molo Cemetery, Molo I Elementary School, Iloilo City National High School and Iloilo City College is. 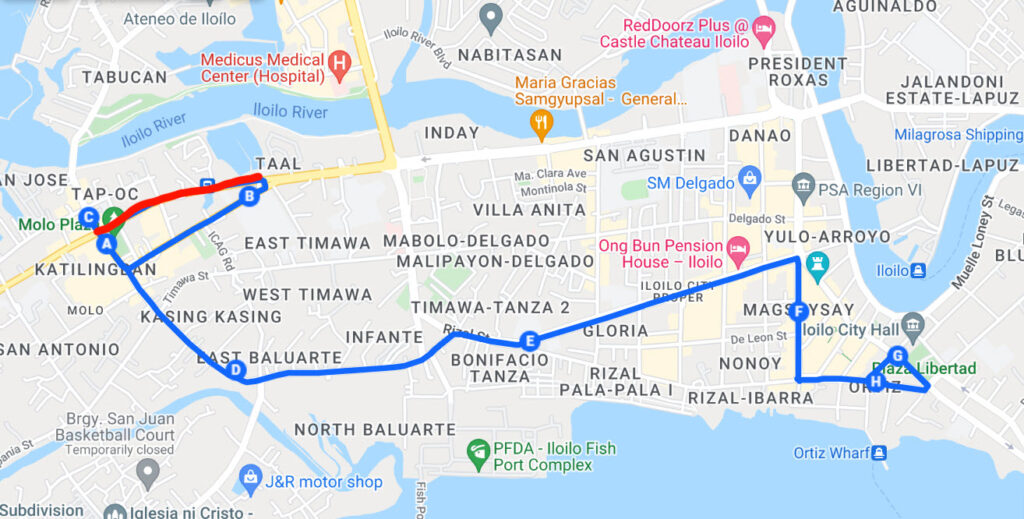 Lastly, Molo Baluarte will make a turn to Ganzon Rotunda (Iloilo City College), where the monument of the late senator Rodolfo Ganzon is located.

It will then pass by the barangay of San Pedro and San Marcos Street. This is where the old Molo Terminal is situated. This part of the route ends at Molo Supermart before the jeep returns again to Molo Plaza / front of Molo Mansion.

Mon Jun 13 , 2022
Compania – Iloilo City Proper Loop is the old Timawa Fundidor and Timawa Compania as we usually refer to. This is now the route that will cater to the areas of Timawa from areas of Compania and San Juan, Fundidor, Timawa, Taal, and all the way to Mabolo-Delgado going City […]